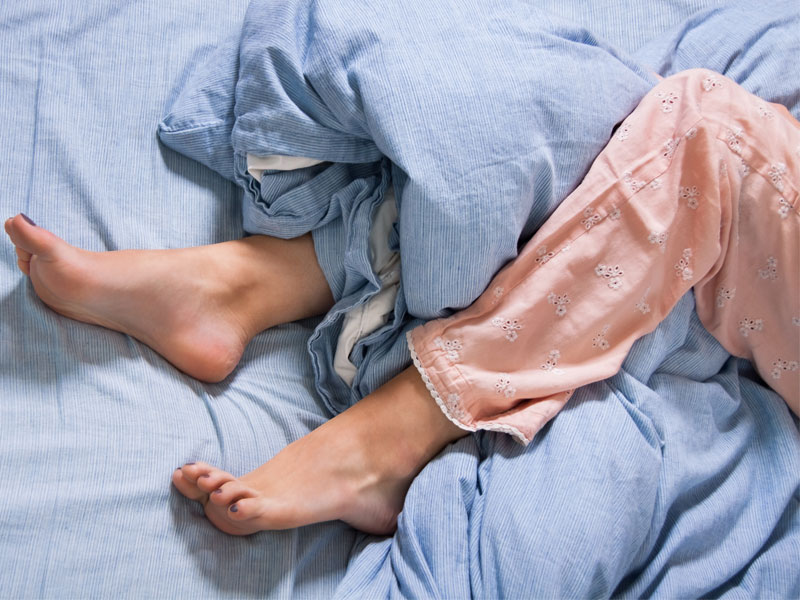 Is your life being disrupted by Restless Legs Syndrome (RLS)? Between 7% to 10% of the U.S. population toss and turn every night to try to relieve the discomfort of restless legs syndrome. Over the past two decades, research has begun to show that there’s a link between varicose veins and restless legs and that treating varicose veins may relieve RLS.

How Do Restless Legs Feel?

Have you ever had an overwhelming urge to move your legs around while lying in bed? Or maybe you’ve had a creepy-crawly sensation in your feet, calves, or thighs? Or even more unsettling, do your arms and legs periodically jerk and jump around for no reason? These are all symptoms associated with RLS.

These symptoms can range from mild to severe and are often worse in the evening or at night. As we mentioned, you may find your arms affected, too.

Generally speaking, restless legs are obnoxious and uncomfortable, but they’re not painful. That doesn’t mean that RLS can’t become debilitating, though.

The cause of restless legs is still under investigation. There’s usually no obvious cause. Some neurologists believe that the symptoms of RLS may have something to do with dopamine. Dopamine supports the control of muscle movement and may be responsible for the involuntary leg movements associated with RLS.

Sometimes, restless legs are the result of an underlying health condition, such as iron deficiency anemia or kidney failure. RLS has also been associated with pregnancy. The good news is restless legs usually settle down after the woman has given birth.

In other cases, the symptoms of restless legs will usually disappear if an underlying cause can be diagnosed and treated.

Do Varicose Veins Cause Restless Legs?

Several studies have found a link between the two and concluded that treating varicose veins also combats restless legs symptoms. For example:

These studies suggest that people with restless legs may have varicose veins, even if they aren’t visible on the surface of the skin, and that varicose vein treatment can benefit RLS as well.

Will Restless Legs Go Away?

It’s rare for restless legs to go away on their own, so some form of treatment is necessary,

If you have a mild case of restless legs that’s not linked to an underlying health condition, you may not require any treatment. On the other hand, a few lifestyle changes will help ease the symptoms.

You can also try massaging your legs regularly and wearing compression socks. This will increase blood flow and may provide relief from symptoms of restless legs, as well as varicose vein symptoms.

If your restless legs symptoms are more severe, then determining and treating the underlying cause will bring relief. For example, if you have iron-deficiency anemia, then your restless legs may go away once you get your iron levels back to normal by taking an iron supplement.

ELAS, or endovenous laser therapy, is a minimally invasive procedure that involves placing a thin laser filament into a varicose vein through a needle puncture in the lower leg. Laser energy heats the vein from inside, causing it to close down. ELAS is very effective, with a 98% rate of completely closing down veins and preventing blood from pooling in the damaged veins. Patients who’ve used ELAS to treat varicose veins have reported a decrease in their RLS, too.

Venaseal is the only FDA approved procedure that uses an injection of medical adhesive to close varicose veins. The treatment closes the vein and re-routes blood to nearby healthy veins. Because the adhesive works immediately, there’s minimal downtime and no need to wear compression stockings after the procedure. This procedure works in the same fashion as ELAS to decrease RLS symptoms. The only downside? Just a few insurances cover Venaseal.

Injection sclerotherapy is another highly effective, minimally invasive option for varicose vein removal. During a sclerotherapy session, an FDA-approved solution is injected into the vein through a microneedle. The solution induces an inflammatory reaction that causes the vein to seal shut and gradually shrink away and disappear. Once the vein is sealed, the body reroutes blood into healthier veins. Patients suffering from RLS who’ve undergone varicose vein removal using sclerotherapy have also reported restless legs symptoms relief.

Restless legs and RLS are not life-threatening. However, if you’re spending all night trying to fight off the urge to move your legs, you may become sleep-deprived. And, even on nights when your restless legs are feeling rested, you may still have trouble sleeping because your body now expects to lie in bed awake rather than be fast asleep!

That may not seem like a big deal, but sleep problems can lead to various medical conditions, including hormone imbalance, anxiety, depression, and more.

To avoid these more significant issues, it’s a good idea to consult your doctor about what might be causing your restless legs. And an even better one is to make an appointment with a vein specialist to map out your veins and ensure you have no varicose veins hiding deep down in your legs.

Want to learn more about how we can help you relieve restless legs? Contact us for a consultation today!

Summary
Article Name
Are Restless Legs a Varicose Veins Issue?
Description
We provide all the information about restless legs and possible links to varicose veins problems – plus your options for treatment to relieve the discomfort.

Are you ready to take control of your vein problems and finally look AND feel your best this year? Then stay connected with our team for important wellness info and be the first to know about the latest Denver Vein news, including:

Drop your email below to get on our list!